The usual idea about strength–I mean the idea of the average reader of health magazines–is generally a wrong one. Although a weightlifter (and weightlifters are supposed to be very narrow-minded in their views on this subject), I hope that I, personally, am broad-minded enough to recognize that a man does not prove himself an all-round strong man just because he is able to lift a heavy weight, especially when the weight is lifted once only. The following is my diagnosis of real strength: 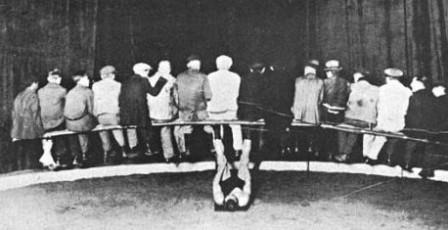 Genuine strength should include not only momentary strength, as proved by the ability to lift a heavy weight once, but also the far more valuable kind of strength known as strength for endurance. This means the ability, if you are a cyclist, to jump on your machine and ride 100 miles at any time without undue fatigue; if a wrestler, to wrestle a hard bout for half an hour with a good man without a rest, yet without becoming exhausted and reaching the limit of your strength.

Apart from sports, enduring strength means that the business man shall stand, without a break-down, business cares and worries, that he shall be capable, when necessary, of working morning, afternoon and night with unflagging energy, holding tightly in his grasp the reins of business, retaining all the while a clear mind and untiring energy, both of body and brain.

The man who can miss a night’s rest or miss a meal or two without showing any ill effect or without losing any physical power, is better entitled to be considered a strong man than the man who is only apparently strong, being possessed of momentary strength, which is, after all, a muscle test pure and simple.

In the latter case, where a man raises, once only, a heavy weight, all that he proves himself to possess is muscular control and great contractile power, but this does not guarantee sound internal organs, nor does it prove that a man would come out well in an endurance test. The man capable of long feats of endurance should live longest, and such a man will find his powers of more avail in every-day life than the man who has sacrificed vital strength for an extra few eighths of an inch of muscle, and perhaps the ability to raise a few pounds more in a certain position in a weightlifting test.

I think the above will cause some of my critics, perhaps, to admit that after all I have broad-minded views on this important question, i.e., “What is real strength?” therefore, if a weightlifting competition were held, I should like to see quite a number of lifts attempted, as is the method on the Continent, and to see each man go on with the lifting without too many opportunities for rest, so that we should not only ascertain who is possessed of greatest momentary strength but also who is possessed of the enduring strength as well, and it is a combination of these two which makes real strength.

Neither do I consider a man a really strong man if he is in certain parts developed out of proportion to others. If a man has tremendous arms and chest and weak legs then he is only half a strong man. If he should have strong legs and arms and weak lungs or a weak heart, then again he is by no means entitled to be called a strong man, and some day the inevitable breakdown will occur which will cause carping critics, always ready to attack Physical Culture, to point to such a broken-down athlete and say: “Here is a proof of the harm done by Physical Culture and weightlifting,” the cause really being that this man has not properly understood Physical Culture, and has developed one part at the expense of another. So you see that if a thorough examination could be made of all so-called “strong men” before the public, we should probably find that only one in twenty is really deserving of the name of “strong man.”

By Author Saxon, The Development of Physical Power, 1905

About the Author: Physical Culturist